Twenty-five years ago, the Union of Concerned Scientists and more than 1700 independent scientists, including the majority of living Nobel laureates in the sciences, penned the 1992 “World Scientists’ Warning to Humanity” (see supplemental file S1).

These concerned professionals called on humankind to curtail environmental destruction and cautioned that “a great change in our stewardship of the Earth and the life on it is required, if vast human misery is to be avoided.”

They proclaimed that fundamental
changes were urgently needed to avoid
the consequences our present course
would bring.

The authors of the 1992 declaration feared that humanity was pushing Earth’s ecosystems beyond their capacities to support the web of life. They described how we are fast approaching many of the limits of what the biosphere can tolerate without substantial and irreversible harm.

The scientists pleaded that we stabilize the human population, describing how our large numbers—swelled by another 2 billion people since 1992, a 35 percent increase—exert stresses on Earth that can overwhelm other
efforts to realize a sustainable future
(Crist et al. 2017). They implored that we cut greenhouse gas (GHG) emissions and phase out fossil fuels, reduce deforestation, and reverse the trend of collapsing biodiversity.

On the twenty-fifth anniversary of their call, we look back at their warning and evaluate the human response by exploring available time-series data. Since 1992, with the exception of stabilizing the stratospheric ozone layer, humanity has failed to make sufficient progress in generally solving these foreseen environmental challenges, and alarmingly, most of them are getting far worse (figure 1, file S1).

Especially troubling is the current trajectory of potentially catastrophic climate change due to rising GHGs from burning fossil fuels (Hansen et al. 2013), deforestation (Keenan et al. 2015), and agricultural production particularly from farming ruminants for meat consumption (Ripple et al. 2014). Moreover, we have unleashed a mass extinction event, the sixth in roughly 540 million years, wherein many current life forms could be annihilated or at least committed to extinction by the end of this century. 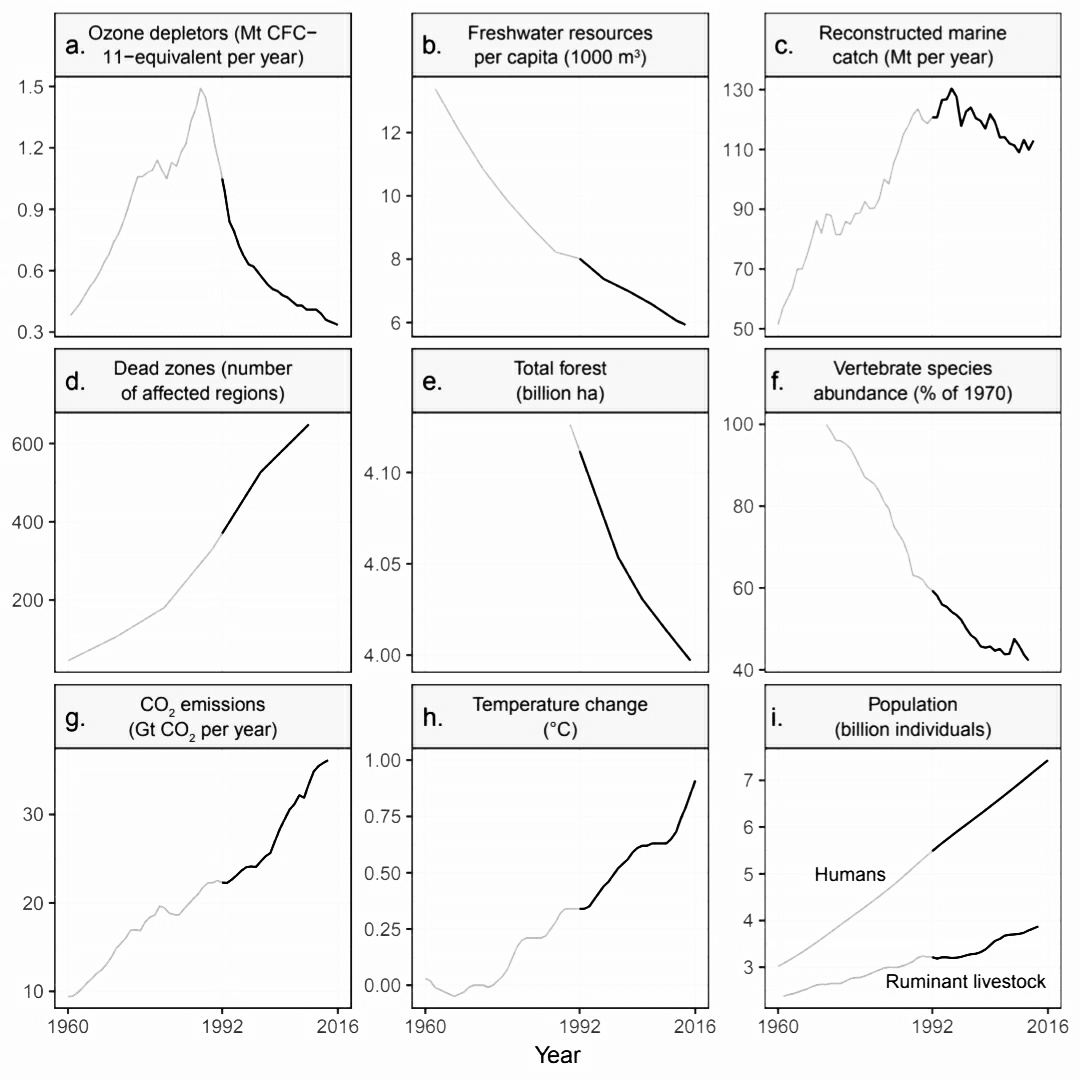 Humanity is now being given a second notice, as illustrated by these alarming trends (figure 1). We are jeopardizing our future by not reining in our intense but geographically and
demographically uneven material consumption and by not perceiving continued rapid population growth as a primary driver behind many ecological and even societal threats (Crist et al. 2017). By failing to adequately limit population growth, reassess the role of an economy rooted in growth, reduce greenhouse gases, incentivize renewable energy, protect habitat, restore ecosystems, curb pollution, halt defaunation, and constrain invasive alien species, humanity is not taking the urgent steps needed to safeguard our imperilled biosphere.

As most political leaders respond to pressure, scientists, media influencers, and lay citizens must insist that their governments take immediate action as a moral imperative to current and future generations of human and other life. With a groundswell of organized
grassroots efforts, dogged opposition can be overcome and political leaders compelled to do the right thing. It is also time to re-examine and change our individual behaviors, including
limiting our own reproduction (ideally to replacement level at most) and drastically diminishing our per capita consumption of fossil fuels, meat, and other resources.

The rapid global decline in ozone-depleting substances shows that we can make positive change when we act decisively. We have also made advancements in reducing extreme poverty and hunger (www.worldbank.org). Other notable progress (which does not yet show up in the global data sets in figure 1) include the rapid decline in fertility rates in many regions attributable to investments in girls’ and women’s education (www.un.org/esa/population), the promising decline in the rate of deforestation in some regions, and the rapid growth in the renewable-energy sector. We have learned much since 1992, but the advancement of urgently needed changes in environmental policy, human behavior, and global inequities is still far from sufficient.